B took a deep breath before turning the key in her front door. The sinking feeling in her chest was continuing and, even though she had succeeded so far in holding back her tears, she was worried that she might burst out crying at any moment. All of the dates that she had been on recently had felt like failures, but that night had been the worst by far. The girl had seemed so nice when they talked on the phone, but in person she was so mean. B didn’t understand why someone would be so critical after only knowing someone for an evening, but the girl had said some awful things that made B feel more self conscious than ever.

Trying to sneak past the living room, B wanted to retreat upstairs without having to tell anyone about the embarrassment of the night she had. B’s flatmate Lindsay was watching TV while B tried to sneak past, and she could instantly tell that something was wrong.

“B?” She called out and, without thinking, B turned to face her. Right away it was obvious to Lindsay that B was upset and she knew better than to let B go through it alone. “Come sit with me,” Lindsay said with a kind smile.

B tried to force a smile back as she entered the living room. She followed Lindsay’s guidance and sat down beside her on the sofa. Gently, Lindsay put her arm around B and held it there for a few moments.

The small gesture of kindness was too much for B and she started to cry softly. After the night that she had, the little bit of care just reminded her of everything that she was missing out on and everything that she was struggling to achieve with her failed dating life. The tears started to flow down her cheeks slowly but the flood gates had opened and she couldn’t close them now. The tears started to fall heavier and she soon found that she couldn’t stifle her sobbing.

She felt ridiculous, sobbing that much over a bad date. Sat on the sofa, still dressed up and with a full face of makeup on, she cried and cried. Her makeup smudged, but she couldn’t find it in herself to care. B thought that she was a mess, what did she care if her appearance showed that truth to the world?

Lindsay placed her hand on B’s cheek. The touch felt soft, but there was power and safety in it too. She felt the dampness under her fingertips as she turned B’s face towards her. B was a little shorter than Lindsay and her posture was emphasising the difference between their heights. With her face only a few inches from B’s, Lindsay looked down at her friend.

Lindsay’s hand on B’s cheek spread out and applied more pressure. She was holding B now, protecting and controlling.

“I’m sorry,” B said, her voice breaking slightly as she forced out the words.

“Shhh,” Lindsay said softly as she started to close the space between them. It was a comforting noise but also order. She was offering B comfort and asking for her obedience in return. In submission, B parted her lips to Lindsay.

Their lips met in a kiss that made B shiver with nerves and arousal. Taking control and guiding B through the kiss, Lindsay slipped her tongue into B’s mouth and started to explore with quick flicks of her tongue. B melted into the kiss, opening her mouth wider and wider for Lindsay’s probing tongue. She let herself open for Lindsay, giving in to the rush of pleasure that was washing over her.

“Relax,” Lindsay whispered softly as she swung her leg over B’s lap. Stradling B, Lindsay started to kiss B with more and more passion.

As she started to get excited, Lindsay’s hands started to wander. She ran her fingers down B’s ample cleavage that was tantalisingly on show in her low cut dress. Her lips started to move lower too as she began to kiss at B’s neck. The kisses turned into nibbles as she let animalistic growls escape her lips.

B shivered from the noise that Lindsay made. It was so predatory and she thought that it should have frightened her. The thrill of it was too much though and she could feel herself growing wet between her legs. The feeling of Lindsay’s teeth against her sensitive flesh intrigued her, she wanted more.

Suddenly, Lindsay pulled back from the kiss. B gasped, having the dizzying pleasure suddenly removed. Standing up, Lindsay offered her hand to B.

“Come,” she said simply, her word more an order than a request. B followed her willingly, needing to know where this might head.

Lindsay dragged B quickly into her bedroom and pushed B to the bed with a rough shove. While B was still recovering from the shock of being pushed, Lindsay gripped the hem of B’s dress and started to tug it off over her head impatiently. She tore it a little, but pulled it off and discarded it.

Letting her eyes roam over B’s body in her underwear, Lindsay smiled.

B looked at Lindsay with her eyes wide. Her heart was racing and she wanted to be with Lindsay so badly. It felt like a dream, but she was so nervous.

“I’ve never done this before,” she said nervously. It was embarrassing, but she needed Lindsay to know.

Lindsay’s face lit up in a smile. “Don’t worry,” she purred as she moved towards B, “I’ll show you how it’s done.”

B was shaking slightly as Lindsay unclipped her bra and let her large breasts bounce free. Moaning slightly, Lindsay grabbed B’s nipples between her lips and started to suck. B cried out from the pleasure of it, feeling her whole body tremble. Passionately, Lindsay kissed and sucked and bit and B’s breasts. She rubbed her face between them and licked at her nipples. B was overwhelmed with sensations as Lindsay pinned her down to the bed and played roughly with her tits.

Pulling her shirt off over her head, Lindsay revealed her pert breasts. B was breathing heavily as she looked at the more experienced woman. Lindsay stood up but B remained on the bed, nervous to move without being told to by Lindsay. Watching B as she did so, Lindsay stripped until she was entirely naked.

“Do you like what you see, Bitch?” She barked at B.

“Yes,” B answered, no longer shocked by the way that Lindsay spoke to her. The degradation and being under Lindsays control just made her so aroused that she accepted it.

With an excited smile on her face, Lindsay moved towards B. With her open hand, she gently slapped B across her breasts and watched the way that they moved and flushed red. Then she gripped the waistband of B’s underwear and started to peel them away.

B couldn’t find any words. She thought about begging Lindsay to touch her, but she was so overwhelmed that the words didn’t come out. She could feel her whole body shaking slightly as she begged without words to be used by the powerful woman.

They were both naked as Lindsay laid down on top of the smaller woman. She let her body press down against B’s. She put her weight on B, pinning her down onto the bed, as she started to kiss her. With a messy and passionate kiss, Lindsay worked her tongue into B’s mouth. Their bodies fit well together, and quickly they found that they were rubbing themselves together with need.

Lindsay pushed her soft thigh between B’s legs and felt her pussy against her skin. She was dripping wet and twitching with arousal. Moving back, Lindsay took B’s nipple in her mouth and started to suck. As she sucked on B’s tits, drawing delicious little moans from her, she let her hand move down to B’s wet opening.

With small and teasing movements, Lindsay started to move her fingers in little circles around B’s pussy. She listened to the noises that B made and felt her body rising up to meet her fingers, she knew that she was driving B wild and that she would have done anything for the release that only Lindsay could give her.

Carefully, Lindsay dipped her finger into the honey and started to work her finger inside. Gasping, B rose her hips up in a spasm of pleasure. The finger slid inside the dripping wet hole easily and Lindsay added another.

“You’re stretching out nicely,” she moaned into B’s ear, “I think you’re ready for something bigger.”

Swiftly, Lindsay pulled her fingers out of B’s pussy then walked over to her wardrobe. B watched with wide-eyed excitement as Lindsay pulled out a box of sex toys. Her heart was racing as she anticipated what was about to happen. Giving in control to Lindsay had taken away some of the anxiety, but she was still shaking with anticipation.

“Get on your hands and knees,” Lindsay said, the words sending a shiver through B.

B did as she was told, getting onto her hands and knees on the bed. It made her blush to be in such a vulnerable position with her arse presented to Lindsay.

“Tell me how it feels, slut,” Lindsay ordered as she placed a sharp slap on B’s arse.

“That’s it bitch,” Lindsay growled, “take it like a good slut.”

When she started getting quicker and harder with her movements, she heard something desperate and needy in the noises coming from B. Lindsay could tell that B was getting close to her orgasm. Reaching around, Lindsay started to play softly with B’s clit. It was enough to get B right to the edge but just soft enough to keep her there. It was clear that Lindsay was in control and that she knew exactly what she was doing.

B’s whole body was shaking powerfully as the incredible orgasm took control of her. She was moaning and screaming as the pleasure coursed through her, she couldn’t stop it or hold it back. She was a slave to the pleasure that Lindsey was giving her. All she could feel was the intense pleasure flowing through her body and making her shake.

Pulling out, Lindsey discarded the strap on and let B fall in an exhausted heap onto the bed. When B rolled over to lay on her back, Lindey straddled her shoulders.

Looking up at Lindsays beautiful glistening cunt, B opened her mouth and stuck out her tongue. Making up for her lack of experience with enthusiasm, B started to lick furiously at Lindsay’s clit.

Together they came on each other’s tongues. B’s face was being covered with Linday’s juices as she came. She drank them down happily, wanting more and more of what Lindsay could give her. They were both shaking wildly and moaning, dragging out the orgasm that they shared as long as possible. Then, finally, they collapsed together in a sweaty heap and enjoyed the afterglow of their pleasure. 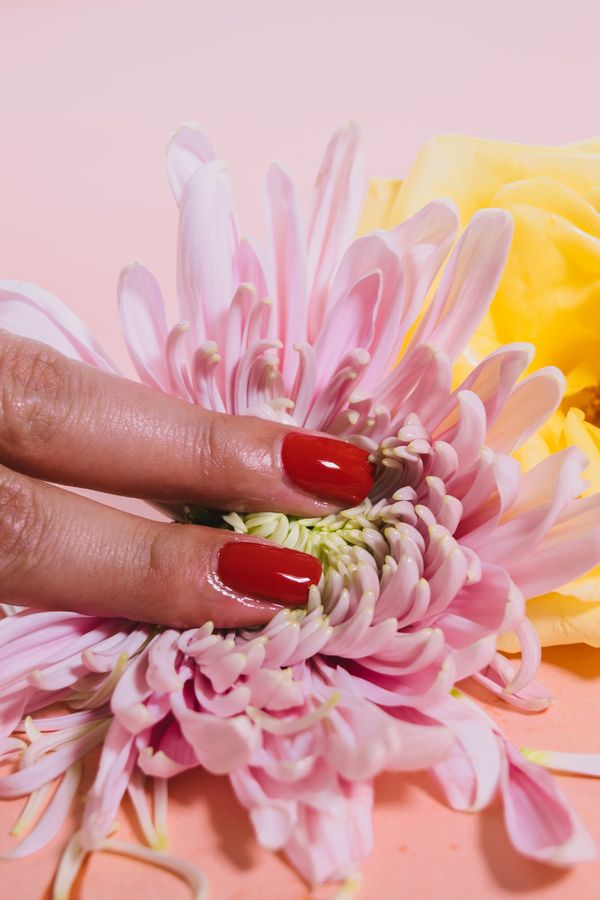 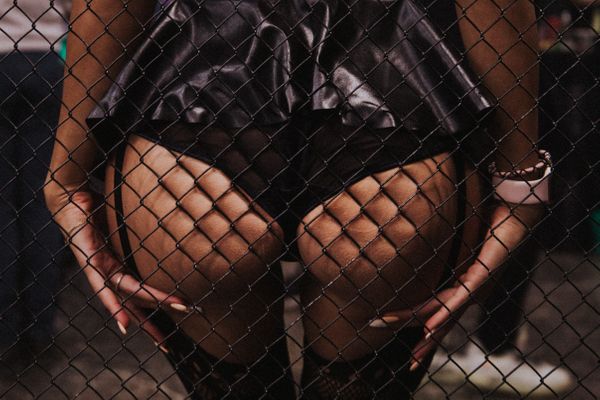 Joe arrived at the restaurant before Mia, but he saw her as soon as she got out of her car. She was beautiful, exactly like she had been in her